On July 1, 2016, regulatory amendments by the Professional Engineers Ontario (PEO) came into effect that require engineers performing tower crane inspections to follow a new Performance Standard called “Review of Tower Cranes As Required By The Occupational Health And Safety Act”.

The PEO regulatory amendments were supposed to become effective at the same time as amendments to the OHSA Regulations for Construction Projects.  But that didn’t happen.  The PEO Regulation came out first and is now in effect, while the amendment to the OHSA Regulation is still waiting to pass and may take another year or so to come into effect.  So now the two regulations that were supposed to work together in harmony are now somewhat inconsistent.

The expected revisions to the OHSA include new requirements for the engineer to verify that the entire crane is safe for use – not just the structure, as is currently specified in the Construction Regulations.  In response, the new engineering Performance Standard dictates the steps needed to complete a full review of the crane’s structural, mechanical, electrical, and controls components.

So What Does This Mean?

Until the tower crane amendments to the Construction Regulations pass and take force, the law still requires that only the crane structure be inspected by the engineer.

The engineer would only have to carry out all the other elements of the Performance Standard (ie. mechanical, electrical, and controls) if the scope of the review covered the entire crane.  This can happen, for example, if there is an order by the Ministry of Labour for an engineer to provide a report stating that the tower crane “is unlikely to endanger a worker”.  In this case, the engineer would be required to verify all elements of the crane, not just the structure, and the Performance Standard would need to be fully met.

How Will This Be Enforced?

Given the current disconnect between the OHSA Regulation and the PEO Regulation, there is a question of how the MOL and the PEO will enforce violations of the new Performance Standard by an engineer.

We wanted to be sure, so we contacted high ranking individuals within both bodies to verify our own conclusions.  We will keep our sources anonymous as we haven’t asked permission to quote anyone.

Our source at PEO confirmed that violations of the Performance Standard would be enforced if a complaint was made and the engineer was found guilty of failing to comply with the Standard.  Simple and understandable.

Our source at MOL indicated that they had not yet come to any conclusions but expected that they would not be enforcing the Performance Standard as it is not part of the OHSA regulations and therefore, not part of their jurisdiction.  We then asked whether MOL was likely to make a complaint to PEO if they felt that an engineer violated the Performance Standard.  The answer was yes, that was a possibility.

Both bodies agreed that the scope of work would dictate how much of the Performance Standard needed to be met.  Thus the engineer would not be guilty of a violation if electrical and control systems were not checked where the job was only to inspect the structure.

So the next question was, where does structural end and mechanical begin.  To that, the MOL source was not clear.  The tone of the message was that it depends on whether there is an incident and the particulars of the incident.

For example, the Performance Standard has very specific requirements for the engineer to review bolt torqueing on the turntable bolts and the tower mast bolts.  These include the use of calibrated torqueing equipment, something that is not common on all job sites right now.  If a turntable bolt failure were to occur, the argument could be made that this is a structural element, not a mechanical element, and thus failure to review it as stipulated in the Performance Standard is a violation of PEO’s regulations.  In this circumstance, MOL may choose to make a complaint to PEO, possibly resulting in discipline for the engineer.

Similar arguments could be made for other elements covered in the Performance Standard.  This puts the engineer in an uncertain position right now while the two regulations are not aligned.  Some engineers may consider the bolts to be structural parts of the crane, others not.  Same with the foundation, tie in’s to the building, wire ropes, etc.

Does This Mean Any Changes For The Tower Crane Owner / Operator?

Well, yes and no.

The Construction Regulations don’t change yet, and the MOL’s enforcement of them won’t change yet.  So there isn’t any direct OHSA change on constructors yet.

However, the engineer may want to do things a little differently to ensure compliance with the Performance Standard and that may mean some changes, depending on your engineer and what they were doing before July 1.

What Changes For The Structural Review?

The Performance Standard provides requirements for an extensive document review prior to any review work by the engineer.  These are to include a review of the manufacturer’s manual, structural inspection criteria and repair procedures by the manufacturer, the crane log book and maintenance records, bolt torque records, manufacturer bulletins, etc.  Thus, you may find your engineer will want to review these documents in greater detail as part of the structural inspection from now on.

The Standard then breaks down requirements for review prior to erection, after erection, and when climbing a crane.  The last item should not have any effect until implementation of the OHSA regulatory amendments.

Prior to erection, the requirement is to perform a visual inspection of all structural components and also a NDT inspection where deemed necessary by the engineer.  Any NDT performed as part of the structural review will now have to be performed by CGSB certified technicians under the Performance Standard requirements.  This closes a loophole in the OHSA Regulation where NDT is specified as a requirement, but only “methods approved by CGSB” needed to be used, effectively allowing unqualified personnel to perform NDT work.

When it comes to the Post Erection inspection, the engineer is now required to verify verticality of the tower crane and review the erector’s report, including bolt torqueing data.

The engineer must climb the crane and access any areas with suitable access platforms and guardrails as part of the post erection inspection.  Long distance inspections using binoculars from the parking lot will not be acceptable!

The Performance Standard makes a point of the fact that an engineer can designate a competent person to do any of the tasks in the review provided it is prudent to do so and there is adequate supervision by the engineer.  The method of supervision is not defined though.

The new engineering Performance Standard largely doesn’t affect the construction industry directly as yet, however, it will have some effect through possible changes in the way engineers carry out their reviews.

If and when the amendments to the Regulations for Construction Projects pass and become effective, the review of tower cranes will become more demanding, covering the mechanical, electrical, and controls components of tower cranes in addition to the structure.  Some cranes out there right now may not be able to pass without extensive work and/or engineering.  Implementation of this Performance Standard is the only a first step towards tightening up tower crane safety.  Tower crane owners and operators would be wise to review the engineers Performance Standard as well as stay on top of upcoming legislation so as to stay ahead of the curve.

The engineer’s Performance Standard for “Review of Tower Cranes as Required by the Occupational Health and Safety Act” can be found by following this link:

About the author:
Dennis Domenichini, P.Eng. participated on the Tower Crane Legislative Review Committee throughout its activity and contributed to the development of PEO’s Performance Standard for the review of tower cranes. 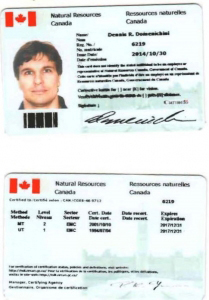